About Terry Wolfe, in his own words: 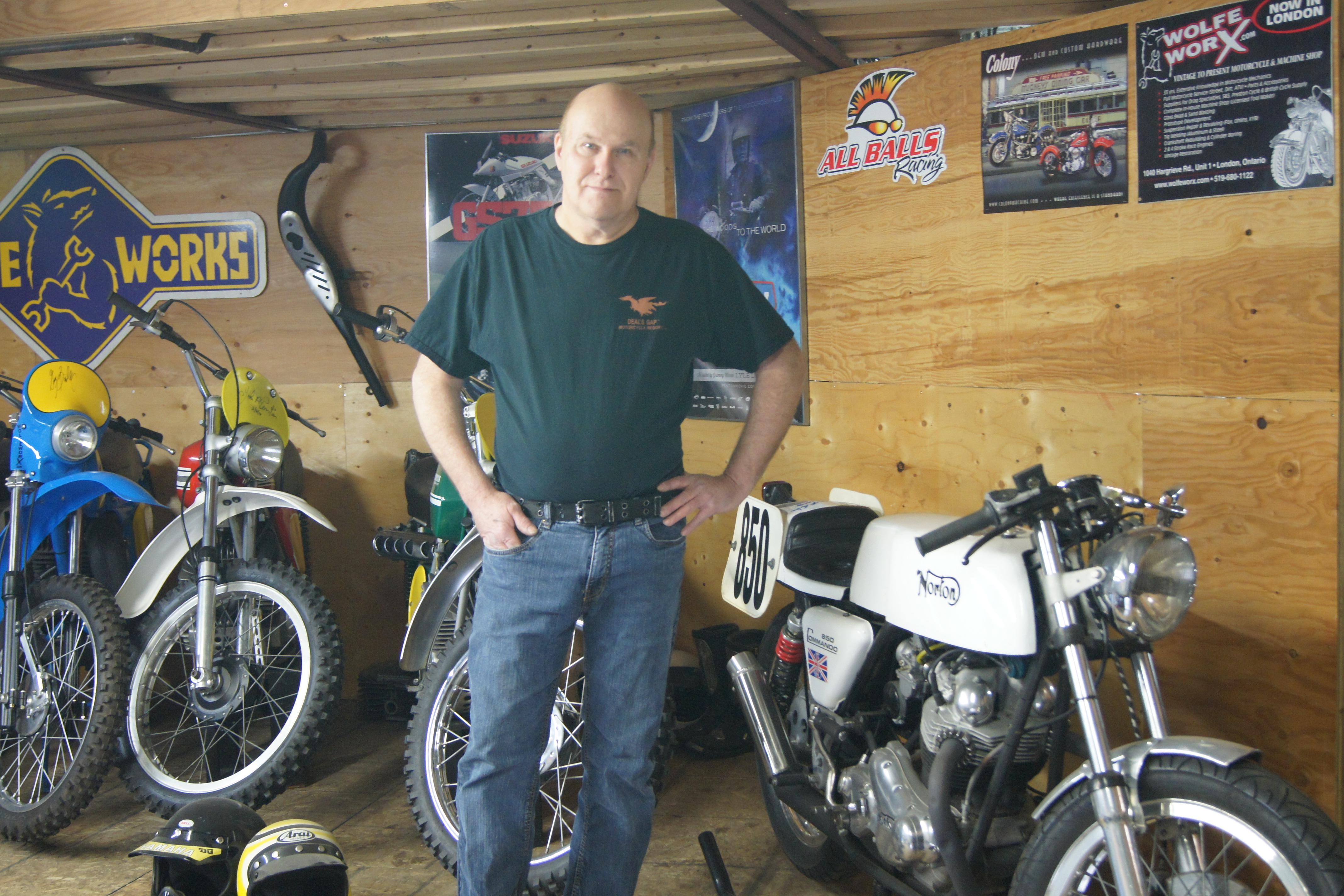 In 1971, I started my motorcycle career riding Motocross, Enduros (achieving expert status), and Dirt Track with the CMA.  I later added vintage road racing with the VRRA, AHRMA, RACE and the AMA.  After graduating from East Elgin Secondary School in 1976, I began working as a motorcycle technician.  I worked at several notable Motorcycle Shops such as Cycle World, Toronto Motorbike, Yamaha Toronto, Canada Cycle Sports, Peckhams in Woodstock, Lake Cycle in Collingwood, Art Williams Cycle and Advanced Motorsports, selling and servicing all types of makes and models.  These included Norton, Triumph, BSA, Suzuki, Jawa CZ, Bultaco, Honda, Evenrude, Moto Ski, Can Am, Artic Cat, and Yamaha.  In 1980, I earned my motorcycle technician license.

In 1988, I began a career change.  I started as a Tool and Die apprentice for Magna International at Magna’s Technical Training Center in Concord, Ontario. After receiving my Tool and Die papers, I worked at Toral Cast from 1988-1995.  I was responsible for building and repairing die-casting tools, trim dies, checking fixtures, functional fixtures and cutters, and mounting fixtures for high speed machining centers, as well as prototype parts.

In 1990, I began a three-year association with the late Alex Mayes, one of the top two-stroke tuners in North America.  Under Alex’s guidance, I developed and honed the art of two stroke tuning, pipe building, and crankshaft rebuilding and porting.  Tuning TZ Yamahas and Aprilia 250 factory road race bikes for racers such as Jon Cornwell, Rick Innman, and Glen Peron was the beginning of a life long association with two-stroke motorcycles.

In 1993, I leased a shop in Concord, Ontario.  I built a second floor, an elevator, a machine shop, and tooled up for motorcycle repair while still working for Magna.  In Christmas 1993, my good friend Alex Mayes passed away from a heart attack, and by 1995, the shop was so busy that I had to quit Magna to work full time at Wolfe Worx.  At this time, I had to hire a mechanic and a machinist.  We serviced all brands of motorcycles.  My company also did the machine work for seven Polaris dealers as well as four motorcycle dealers.

In 1998, I received a call from Trevor Huys, who worked for a film rental company in Toronto called William F. White.  He asked Wolfe Worx to fabricate and weld aluminum test equipment for their head office in the camera department.  This turned into fabricating camera handles, explosion proof boxes, machining and engraving focal rings for camera lenses when HD started, camera fixtures, gimbal heads, and rigging.  We worked on the sets of several motion pictures such as “Honey I Shrunk The Kids”, “The Matrix”, “Ice Princess”, “Tuxedo” (Jackie Chan), “Driven” (Sylvester Stallone), “K19” (Harrison Ford) and “How To Loose a Guy in Ten Days” (Kate Hudson and Matthew McConaughey).  I also worked on two Rolling Stones tours, “Voodoo Lounge” and “Bridges over Babylon”, fabricating rigging and microphone mounts for Mick. For more on fabricating for Movies and Live shows, visit our Movie Projects page.

I strongly believe that one thing leads to another in business.  In 1998, when I worked with William F. White, I met Chris Holmes, manager of the camera department.  I discovered he was an avid Snow Cross racer.  Before long, I was assisting him at the races.  It was here that John Baylis, the race coordinator for head office of Yamaha Motor Canada discovered my capabilities and expertise in the business.  I was offered a position where I managed the race team.  Wolfe Worx fabricated all the extra bracing, suspension, motor mods and track tuning necessary.  This was for two years; however, when the factory would not build a machine for the sport, we became non-competitive and Yamaha Canada pulled the plug.  After this I also became a KYB rebuild center for Yamaha and helped them with prototype accessories.

In 2002, I moved Wolfe Worx to Mississauga, and did all the service and machining there.  At that time, Honda Canada had a recall on almost all the GL 1800 gold wings.  It was a possibility that the aluminum frame could crack, so a weld repair was necessary.  I repaired more than 200 of them and also did some work on their race trailers.  In 2004, an old friend Larry Parker called to have some Fox shocks rebuilt.  He had just built a new shop in Port Stanley, Ontario, where his son Dean and he were going to rent snowmobiles.  I saw his shop, and realized we had two businesses that complemented one another.  Larry and Dean Parker were taking on Yamaha ATVs, snowmobiles, TTRs, YZs, and power products.

Wolfe Worx ran in Port Stanley just as we did in Toronto.  We reworked 130 more Goldwing frames, as well as built 25 trophies for Honda Canada for the opening of a new motor plant in Alliston, Ontario.  To make the trophies, I had to cut up 16 new Civic cylinder heads.  I also rebuilt and modified 32 hydraulic cylinder assemblies for Woodbine Racetrack’s main starting gates for horseracing, as they were not functioning properly.

In April of 2013, an opportunity came up to move my shop to London, Ontario, and I jumped at the chance.  Wolfe Worx is a full service shop selling parts, accessories and more. We installed a second floor in the shop to add space for seasonal storage of motorcycles, and we have a number of vintage bikes on display in the front room.  In addition to being a full motorcycle repair shop, we do restorations and custom work as well.  To top it all off, Wolfe Worx is also a full machine shop and we now offer vapour blasting to clean and prep and give your parts the finish you want.